I have a few guilty pleasures in life, and Julie Hutchings is one of them. If you don’t know her, that needs to change. She is a fantastic lady, radio show host, and author extraordinaire. So naturally I was tickled when Julie agreed to come on my site for an interview!

Julie is the author of upcoming release Running Home, which simply put is a novel about vampires but it’s SO much more than that! You can read more about Running Home here . Let’s jump to it!

Q. What inspired the book Running Home?
The big one? Having a baby. Being pregnant and having my son made me more afraid than anything I have ever been afraid of. Not that I couldn’t do it, but that I would lose him, or my husband, that one day he would be gone. I have a horrible fear of death, for good reason, and it became enormous when I got pregnant. That’s where the idea of Ellie being followed by death came from. And then on maternity leave, I read Twilight, and wanted that kind of sense of wonder in an ordinary world that it gives you for grown ups.
Q. What was the hardest part about writing your book? The ending? The middle? Or did all of it seem to flow?
It flowed really easily for me, actually, but the hardest part was in editing, getting that first chapter right. The super horrible kill yourself hard part was going back and digging deeper to make sure that Ellie was as complex as she should be. I really struggled with ‘well, what if there’s nothing else to give her? What if this is all she is/this is all I am and it isn’t good enough?’ Ugh.
Q. How long did it take you to write?
About 4 and a half damn years. And it was all in longhand, so then I had to type the whole thing up.
Q. Do you ever dream about the characters in your book?
Nope. Those suckers know when to punch the clock.
Q. What are you reading right now?
Live and Let Drood by Simon R. Green which kicks the ass off of my ass.
Q. What is your writing habit? Wine and snacks? Music and pictures of Robert Downey Junior?
I’m not a wine girl. When I write with Kristen Strassel, there’s beer involved now. A lot. When we used to write together when she lived on the beach, though it was always coffee and hot chocolate. But just about all of my writing happens at home, and I like to get up nice and early, like 5, have a shower, a shitload of coffee, listen to music and bust it up.
Q.  What is your next release going to be? Do you know yet?
I do not! I only have a one book deal for Running Home, though it is most definitely a trilogy.
Take note, booky suitors. 😉
Q. What is your next release going to be? Do you know yet?
I do not! I only have a one book deal for Running Home, though it is most definitely a trilogy.
Q. If you could give on piece of advice to writers out there, what would it be?
Write what the hell you want. Don’t worry about the genre, about the market, about publishing. Write it because you have to write it. That’s what makes a good book.
Q. Where will Running Home be available for purchase?
The scheduled release date is July 22nd, though it looks like it may be a bit later on the press’s end. The paperback will be out early fall.
Q. Who is your favorite author?
Simon R. Green. I adore the Nightside series, and the Droods, as well as Shadow’s Fall. He’s amazing to me, such an imagination.
Lightning round:
Coke or Pepsi? I don’t ever drink soda. My karate teacher made me quit when I was 15.
M&Ms or Skittles? M&M’s
Coconut or Pineapple? Coconut
Beer or Wine? Beer, always
Hot or Cold? Hot drinks, cold weather
Being attacked by ninjas or being attacked by pirates? Pirates don’t stand a chance. Ninjas.
80’s hair or 80’s spandex jumpsuit? Spandex jumpsuit. David Lee Roth style.
Don’t forget to check out Julie’s new release- coming soon! 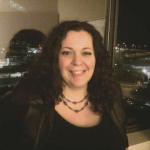 Julie’s debut novel, Running Home, an Urban Fantasy  giving you vampires with a Japanese mythology twist will be published by Books of the Dead Press July 22nd, 2013. In the meantime, the Muscle and Wildcard of the Undead Duo is working on the sequel, Running Away, and a new and fun freakshow called The Harpy. Fear not, the Egyptian sex god, The Animal, patiently awaits a second draft. Julie revels in all things Buffy, has a sick need for exotic reptiles, and drinks more coffee than Juan Valdez and his donkey combined, if that donkey is allowed to drink coffee.  Julie’s a black belt with an almost inappropriate love for martial arts. And pizza. And Rob Zombie. Julie lives in Plymouth, MA, constantly awaiting thunderstorms with her wildly supportive husband and two magnificent boys.
How to connect with Julie:
undeadduo@hotmail.com
deadlyeverafter.com
facebook.com/deadlyeverafterblog
Twitter: @hutchingsjulie
http://www.booksofthedeadpress.com
Pin this Post
Share this Post
4 Comments
Leave a Comment

My Next Big Thing: Bump in the Night