I’m lucky enough to know Cara Elizabeth and I’m even luckier to have read her new adult novel Elegantly Wasted. I’m saving my review for the end of the tour (but it contains squeels and shouts of joy for how well this novel is written and how funny these characters are). But for now, I want to share with you an exclusive excerpt hand picked by Cara herself. Enjoy!

I turned my head slightly towards the clacking of heels on the stone floor of the cold church.
Addison Fairholm knelt quickly at the edge of the pew and instead of the usual father-son-holy-spirit motion, she raised her middle finger towards the coffin and brushed herself quickly into a sitting position beside me.
“Nice of you to show up,” Kat’s eyes were hidden under big Gucci sunglasses. She liked to pretend she was more important than she was and that meant wearing sunglasses inside. That or the bright light pulsing through the miles of stained glass was way too much for her massive hangover. Then again, I was pretty sure she was still drunk.
“I was trying to pick out the right outfit for this grand finale,” Addi whispered harshly.

Sign up to help reveal the cover for Uncontrollably Wasted (book #2) on July 9th!
Click here to join!  And thanks! 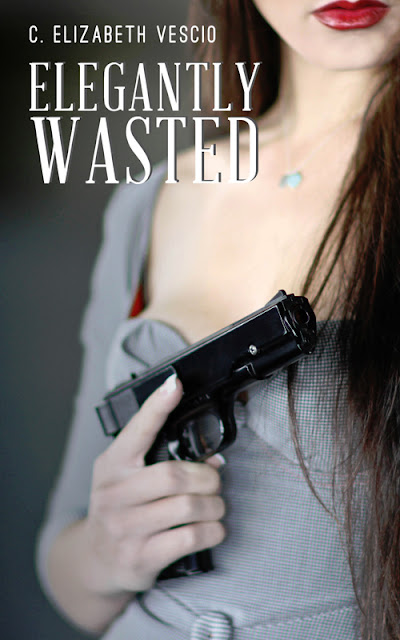 On the eve of her high school graduation, proper socialite Francesca “Frankie” Fairholm rebelled against her elitist and controlling family to pursue the dark lifestyle of a contract killer for the enigmatic Osiris Corporation. Years later, with her training complete, she believes she’s doomed to the life of a sociopathic lone gun until a botched hit brings two unlikely allies, her cousins Addison and Katharine. Using Katharine’s etiquette school, Elegance, Inc., as a front, the trio weave through Frankie’s dark underworld, carrying out contracts, drinking too much wine, and trying not to get each other killed. Trouble follows the team home when the death of the cruel Fairholm matriarch reveals more than they ever wanted to know about their family. As the funeral preparations play out, the trio begin to realize there is much more to their employer than meets the eye and their family connections run deeper than they ever imagined.
Add it to Goodreads!
Buy it today!

Jack of all trades and stereotypical black sheep, Cara has been writing somewhat dark and morbid since that teen angst hit somewhere in the early 90′s- probably because her dad was a mortician. After pursuing a degree in English, she changed gears to photography and design in 2006… although she kept penning stories for fun while reading the works of Edgar Allen Poe, Oscar Wilde and Hemingway (whom she adores even though he was a huge douche canoe). In 2009, her life shifted considerably and she found herself writing Elegantly Wasted- helping her sort out a bunch of stupid feelings and other lame stuff. She enjoys cynical debates, cupcakes, making her mother-in-law sew her aprons that she never wears, zombies, the Fifth Element and Tomb Raider. She gathers her life inspirations from Neil Gaiman, Julia Child and Paul Simon. When she isn’t out photographing her next project, she’s studying color, concept and design or writing stuff down in hopes it makes sense one day… or she’s on Pinterest. Cara lives in Las Vegas with her husband, John and their three genetically altered dogs all of which have personal vendettas for the guy who cleans the pool.
Cara on Goodreads
Cara on Twitter
Cara contributes to: Pen and Muse

What’s next for the tour?

Bump in the Night. Also a contest!