I am beyond excited to be able to share you with the cover of upcoming and awesome YA sci-fi novel Ultraviolet Catastrophe by Jamie Grey! 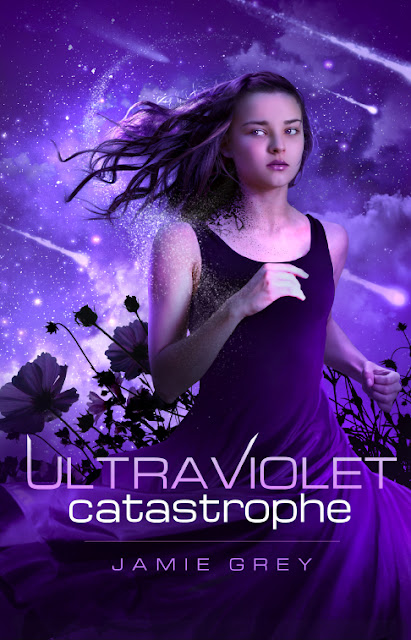 Quantum Electrodynamics. String Theory. Schrödinger’s cat. For sixteen-year-old Lexie Kepler, they’re just confusing terms in her science textbooks, until she finds out that her parents have been drugging her to suppress her outrageous IQ. Now Branston Academy, a school run by the world’s most powerful scientists, has tracked her down and is dying for her to attend – as a research subject.
She takes refuge at Quantum Technologies, a secret scientific community where her father works as a top-notch scientist, and begins her new life as girl genius at Quantum High. But the assignments at her new school make the Manhattan Project look like preschool – and Lexie barely survived freshman algebra.
Her first big assignment – creating an Einstein-Rosen bridge – is also her first chance to prove she can hold her own with the rest of QT’s prodigies. But while working with the infuriatingly hot Asher Rosen, QT’s teen wonder, Lexie uncovers a mistake in their master equation. Instead of a wormhole, the machine they’re building would produce deadly ultraviolet rays that could destroy the world. Now Lexie and Asher have to use their combined brainpower to uncover the truth behind the device. Before everyone at Quantum Technologies is caught in the ultraviolet catastrophe.
Add Ultraviolet Catastrophe to Goodreads
Follow author Jamie Grey on Twitter
Like her on Facebook
Pin this Post
Share this Post
2 Comments
Leave a Comment

Down the Rabbit Hole with Leap Books