Today on the blog, we have the fabulous author Helen Boswell! 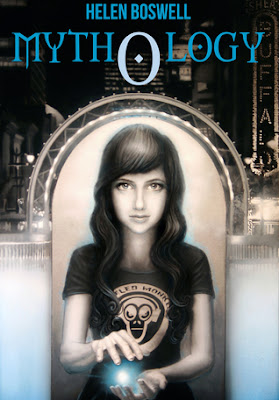 Hope Gentry doesn’t believe in Fate. Born with an unusual power to see the dark memories of those around her, Hope just wants to be a normal teenager. But on the first day of her senior year of high school, she finds herself irresistibly drawn to a transfer student named Micah Condie.
At first glance, Micah seems like a boy that most girls would dream about. But when Hope’s powers allow her to discover Micah’s darkest secret, she quickly becomes entangled in the lives of mythical entities she never dreamed existed. Was this her destiny all along? And will her powers help her survive the evil of the Demon Impiorum?

Playlist for Mythology
Helen Boswell – Mythology by Jolene Haley on Grooveshark
Song list: (title : artist : album)
Demons : Imagine Dragons : Night Visions
Resistance : Muse : The Resistance
How to Save a Life: The Fray : How to Save a Life
All the Sand In All The Sea : DeVotchKa : 100 Lovers
When You Were Young : The Killers : Sam’s Town
Butterflies & Hurricanes : Muse: Absolution
This Is Your Life : The Killers : Day & Age
Only The Young : Brandon Flowers: Flamingo
For Better…Or Worse? : The Postmarks : Memoirs at The End Of The World

Notes from the Author
…Some of the songs are natural carry-overs into the playlist for MYTHOLOGY: THE WICKED (out Fall 2013).
Why these songs?
Some because they gave me all the FEELS
e.g., Butterflies & Hurricanes gives me the tingles 🙂
Some because I could picture the songs playing for specific scenes
e.g., Micah riding away on The Triumph to the beginning of Resistance
Some because of their specific lyrics
e.g., Demons fits Micah to perfection.
“When you feel my heat
Look into my eyes
It’s where my demons hide
It’s where my demons hide

It’s an interesting photograph, the one by Draper. It’s of the crowd at a city train station like the one on Exchange Street. The subjects of the photograph are a man and a woman on opposite ends of the frame. They’re highlighted, but by being transformed to black and white while everything else in the photograph is in true color. There’s almost a tragic feel to it, like they’re forever imprisoned apart from each other in monochrome.
I take a step back to look at the photograph from a distance. But the other person in the gallery must have been standing right behind me, and I crash into him. I step forward and spin around.

He’s wearing all black – a black suit with simple, elegant lines, a black dress shirt, black shoes. He has dark eyes, a dark complexion, jet-black hair. I wonder if he dyed it to match his suit.

His eyes are fixed on me. And this is exactly where I stop noticing anything about the rest of his face because there’s an eerie white fire blazing in his pupils.”
“Do you want to know the story behind Fate?” he says suddenly.

“Huh?” I immediately wish I hadn’t said anything. I have no idea what he’s talking about, but that doesn’t mean I have to sound so… inarticulate.

“Fate,” he repeats with an indulgent smile. “The title of the piece you were examining so closely.”

I know the placard doesn’t show the title for the photograph, but I glance over my shoulder anyway. Nope, just the name of the artist.

“Okay,” I say gamely. Maybe he read about it somewhere. Maybe he made up the name himself. Either way, I’m too curious not to ask. “So what’s the story behind ‘Fate’?”

About the Helen Boswell
Helen was a complete bookworm from the time she could sound out the words on the page. She’ll always be thankful for her mom allowing her to read at the kitchen table during mealtimes. Reading naturally led to writing by the time she was eight or nine – she started with fantasy stories, dabbled in contemporary fiction, and even tried a little romance. MYTHOLOGY is an urban fantasy/love story and in that way reflects some of her earliest writing interests.

Things that inspire Helen to write are bowls of ice cream with lots of Magic Shell, the lack of cats or other things she’s allergic to in the vicinity, and plugging into playlists with her Neff headphones – the knit ones with the bear’s ears.

My Next Big Thing: Bump in the Night

642 Things to Write About